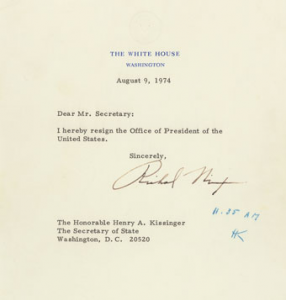 After sending Haldeman a letter introducing himself, Alexander Butterfield meets with Haldeman in New York City.

Andrew Goodpaster, former White House Staff Secretary in the Eisenhower administration, suggests to Haldeman that he have a deputy.

Butterfield is offered the position.

Larry Higby, an assistant to Haldeman, tells Butterfield that the president wants an audio taping system in the Oval Office and on White House telephones.

Butterfield works with the Secret Service to install hidden microphones in the Oval Office and on White House phones.

(Butterfield later testifies that the existence of the system is known only to himself, the president, Haldeman, Erhlichman, Higby and the Secret Service technicians.)

The office of the Committee to Re-elect the President (CRP) opened to raise funds for Nixon’s reelection. Investigations later revealed CRP operated a slush fund, engaged in money laundering and was actively involved in the Watergate scandal.

Nixon orders a taping system in his office in the Executive Office Building.

The Pentagon papers, leaked by Daniel Ellsberg, a former defense analyst were published by The New York Times.

Sometime thereafter, Special Counsel to the president, Charles Colson compiles a list of Nixon’s major political opponents, informally known as “The Enemies List,” a list of 20 private citizens so diverse it included Paul Newman, the actor and Daniel Schorr, the newsman.

The same day, the White House “Plumbers unit,” named for their orders to plug leaks in the administration, burglarizes the office of the psychiatrist treating Daniel Ellsberg to find files on Ellsberg.

A burglary at the DNC (Democratic National Committee) offices in the Watergate Complex is reported.

A second burglary of the DNC offices is reported.

Five persons are arrested burglarizing the DNC offices. Among them is a former CIA employee, James McCord, giving his name as Edward Martin. The police recover burglary tools and $2,300.00 in cash, mostly in sequenced 100 dollar bills. Later, with search warrants and a search of two hotel rooms rented at the Watergate Complex, an additional $4,200.00 in sequenced 100 bills is recovered.

The next day, John Mitchell (who resigned on March 1, 1972 as Attorney General to head CRP), denies any links to the burglary.

A cashier’s check for $25,000.00 issued on the account of Kenneth Dahlberg, midwest finance chairman for the re-election campaign, instead ends up in the bank account of one of the burglars.

In an article published by The Washington Post on September 29, John Mitchell, as Attorney General, is alleged to control a secret Republican fund to finance widespread intelligence gathering against the Democrats.

President Nixon denies any connection to any of the activities.

On the same day, the president-elect denies any connection to the burglary of the DNC offices.

The Washington Post reports that the FBI has established the Watergate break in was part of a massive campaign of political spying and sabotage conducted the White House.

Nixon orders Dean to prepare a report on what he knows about Watergate. Concluding he was to become the “scapegoat,” as he would be implicating himself, he did not complete the report.

Nixon announces that his staff will appear before the Senate Committee and the White House issues an official statement claiming the president had no prior knowledge of the Watergate affair.

Senior administration officials, Haldeman, Erhlichman and Attorney General Kleindienst resign. John Dean is fired. Kliendienst is replaced by Elliot Richardson on the same day he resigns and General Alexander Haig becomes the new Chief of Staff on May 4.

The hearings are televised nationwide; PBS airs all 250 hours, from opening to closing gavel.

After Elliott Richardson nominates him, Archibald Cox is sworn in as the Special Prosecutor for Watergate.

Dean testifies before the Committee and for the first time, implicates himself, Nixon and former Attorney General Mitchell. He states, “There is a cancer growing on the presidency.”

However, Nixon denied knowledge of the cover up and other than notes he had taken, Dean had no corroborating evidence that the president was involved except he was suspicious that the conversations might have been taped.

A request for the dates

A request for the dates that Dean had met with the president lead Special Counsel J. Fred Buzhardt to provide a document to Minority Chief Counsel Thompson supposedly to impugn Dean. However, the document contained almost verbatim quotations which, when Scott Armstrong, Committee majority investigator obtains a copy, realizes there must be a taping system.

Thereafter, questioning of potential witnesses include a question about a taping system.

Using a system based on the spiderweb model used by Carmine Bellino, investigators began identifying potential witnesses who may have a link to the White House during the times in question. Although Alexander Butterfield left the White House in March of 1973 for the FAA, he was, up to that time, Haldeman’s Deputy.

Majority and minority investigators questioned Butterfield. Under questioning by Minority Assistant Counsel Sanders who asked if there was any truth to the speculation by Dean that conversations were taped, Butterfield said, “I was wondering if someone would ask that. There is tape in the Oval Office.”

The Legal Battle for the Tapes

After Nixon refuses to voluntarily turn over the tapes in response to requests by The Committee and The Special Prosecutor, both serve a subpoena.

Nixon responds to the Committee in a letter to Senator Ervin, refusing to honor the subpoena.

Nixon sends a letter to Chief Judge Sirica, refusing to honor the subpoena, citing Executive Privilege and Separation of Powers.

The Special Prosecutor applies to the District Court for an order requiring production of the evidence.

The president responds to the Court, stating that the July 25 letter to the court was a valid and formal claim of Executive Privilege.

The Committee files suit with the District Court seeking the tapes.

Sirica issues an order stating that Nixon turn over subpoenaed tapes to the Court which will decide, after listening to the tapes, if they should be released to the grand jury.

Nixon refusing to obey the Court order, files a Petition for Writ of Mandamus with the Circuit Court of Appeals to vacate the District Court order.

Nixon files a response. Judge Sirica, Chief Judge of the District Court, is the judge for both actions.

The Appeals Court sets an expedited schedule and the matter is heard by the court, en banc.

The Appeals Court issues its decision, declining to vacate the District Court decision, only modifying it to be consistent with the Appeal Court’s criteria and procedures.

With the Committee’s pursuit of the tapes effectively thwarted, the Special Prosecutor continues pursuit of enforcement of the order of the District Court order seeking the tapes.

After the “Saturday Night Massacre,” public sentiment turns against Nixon

One year after Senate Resolution 60 established the Senate Select Committee on Presidential Campaign Activities to investigate campaign activities during the 1972 election, The House of Representatives passes House Resolution 803 authorizing its Judiciary Committee to investigate whether there is sufficient evidence to impeach President Nixon for high crimes and misdemeanors primarily related to the Watergate Affair.

The Senate Watergate Committee issued its Final Report which included exhaustive accounts of the various investigations, full of documents from the Nixon White House and 35 recommendations for legislative change, including independent public attorney to investigate and prosecute wrongdoing in the executive branch.

Relying on evidence uncovered by The Senate Watergate Committee, the House Judiciary Committee votes by 27 to 11, on July 27, 29 and 30, three articles of impeachment.

President Ford issues a full and unconditional pardon of former President Nixon immunizing him from prosecution for any crime or crimes “he had committed or may have committed or taken part in” as president.

However, based on evidence uncovered by The Senate Select committee on Presidential Campaign Activities, more commonly known as “The Watergate Committee,” 69 indictments were issued with 48 convictions secured through trial or plea bargain; many of Nixon’s former senior staff were among those convicted.